Tallahassee Charter Bus Company is available 24/7 to help you find the best charter bus and minibus rentals in Florida. Call us today at 850-391-7631 to learn more about buses available near you and to receive a personalized quote! 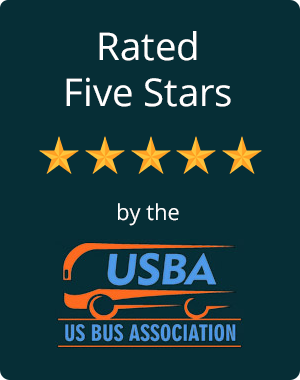 Tallahassee Charter Bus Company connects you to the best and newest charter buses in Tallahassee FL, one of the leading college towns in the United States and the capital of Florida. We work hard 24 hours a day to arrange you with the best transportation in town and the rest of Florida. No matter how big or small your group is, we will get you a bus to take you anywhere you wish. For more details and specials please call us!

10 Reasons Why You Should Charter A Bus Around Tallahassee

The 17th century Spanish mission grew into the metropolis of nearly 200,000 people. After arriving in Tallahassee, there are a number of methods of getting around. The city's transportation options include mass transit buses and private taxi services. However, chartering a bus gives visitors the chance to come and go as they please while allowing your group to remain together. There are a number of other reasons to charter your own bus.

Though Tallahassee has a modern State Capitol building that more closely resembles a skyscraper, the Historic Capitol still stands on the same property. Touring the older building gives guests the opportunity to learn more about the lawmaking process in the early 18th century. With the exception of Thanksgiving and Christmas, the historic building remains open all year long. Once inside, guests are welcome to embark on self-guided tours of the House and Senate chambers in addition to the Florida Supreme Court.

From TV broadcasts, most people are familiar with the flight control room where a team of people direct the space shuttle missions. However, the Challenger Learning Center places visitors in the midst of the action with a flight control simulator. Through the joint efforts of the Florida A&M University and the Florida State University College of engineering, the aerospace project was designed to initiate more interest in the fields of math and science. The facility also features a high-definition IMAX theater and a planetarium, which presents a unique look into outer space where the planets, stars and other structures make up our galaxy.

The unique museum combines a natural habitat zoo with authentic homesteads and a pioneer farm, which enables guests to learn more about Tallahassee's history and nature. The zoo houses animals native to the state of Florida. Some of the inhabitants include the American alligator, black bears, bobcats, river otters and the endangered panther. The working pioneer farm houses common livestock animals and provides visitors with the chance to see what farm life was like during the 1880s. Other exhibits include a traditional school and a Southern cotton plantation.

Guests have the chance to step back in time and experience life as it was in the 17th century at the first Spanish Franciscan mission that grew into a village. The reconstructed site spans 60 acres and includes a church, tribal council house, and the homes where Spanish settlers and Apalachee Indians lived during that time. The location also displays more than 300 artifacts that were discovered on the site. While visiting, guests watch the blacksmith performing his daily tasks, catch the aroma of foods cooking over the fire and watch the youth play typical era games. Meet the church friar and learn about the life of a soldier at the fort.

Explore the fascinating history of Tallahassee and the state of Florida when touring the 30,000 square foot facility. The facility houses numerous permanent and rotating exhibits in addition to hosting periodic traveling displays. Some of the museum's treasures include artifacts that date back at least 12,000 years. The collection spans forward through time to the miniaturized collection of WWII naval ships and NASCAR memorabilia. Upon entering the building, guests are greeted by the massive 11-foot mastodon skeleton that is affectionately named Herman. The remains were uncovered in the Edward Ball Wakulla Springs State Park. Admission is free of charge.

The historic home was built in 1843 by black construction contractor George Proctor. Attorney Thomas Hagner and his wife Catherine moved into the house upon completion. In 1865, the home served as the temporary headquarters of the Union Army. On May 20, on the front steps of the residence, Brigadier General Edward McCook presented the Emancipation Proclamation, which declared the freedom of Florida's slaves. Through the years, local physicians and Supreme Court Judges lived on the property until it passed to William Knott and his family in 1928. The interior of the home remains the same as when the Knotts lived there. As the home is affiliated with the Museum of Florida History, there is no charge for admission.

Maclay and his wife began the gardens in 1923 when they purchased the property as a winter refuge. Today, the location features hundreds of flowering plants and trees. Guests are encouraged to stroll along the brick pathway, see the secret garden and reflection pool. Lake Hall provides access to boating, fishing and swimming. Pavilions and grills line the shoreline for picnics. The location also has two nature trails, five miles of shared trails and five miles of designated cycling trails.

Some of the historic vehicles housed in the facility include a 1911 Ford Model T, a 1962 Amphicar and the hearse that carried the body of President Abraham Lincoln. Other impressive vehicles include the authentic Batmobile and Penguin's Duck Vehicle. Beyond vehicles, the museum collections feature historic boats and fishing gear, rare Stineway pianos, historic toys, Native American artifacts and a recreated general store.

Aboard a chartered bus, a friend or family group has the opportunity to take a short day trip to nearby Thomasville, Georgia to tour the amazing Pebble Hill Plantation. The entire property encompasses 3,000 acres. However, guests typically only venture about the 77 acres that contain the Main House, the Uno Hill Barn and auxiliary buildings, which includes the Dog Hospital, Noah's Ark and a log cabin school. The property is also home to a variety of canine and equine friends. The interior of the Main House features original furnishings, priceless antiques and an exquisite art collection. The grounds additionally boasts manicured gardens and groves along with grills and picnic areas.

When the sun sets in Tallahassee, visitors and locals alike have the chance to go out and explore the city's dining options. Choices range from popular American fast food destinations to fine dining restaurants specializing in eight different ethnic cuisines. After dinner, consider taking in a show, a concert or a theater performance. When in a partying mood, Tallahassee has a wide range of bars, breweries, clubs, pubs and taverns to sit, relax and have a favorite alcoholic beverage. Having a chartered bus at your disposal means there is no worries about getting back to your hotel.